So I was in Kauai on my honeymoon and stumbled upon Cafe Coco on the main highway just north of Lihue. It is set back a bit but after researching various vegetarian and vegan friendly establishments I was sure that I would be okay here. The Frommers guide had promised me and I took that promise as an oath, mostly because I was tired and hungry. So my reluctant carnivore husband gave up his dinner plans of Luau Style Pork Feasts and entertained my request and in we walked to a small mostly outdoor cafe set far from the road with a family like atmosphere. The owner was there and two staff a waitress and cook, but more importantly a third unofficial staff member was a medium sized, dark-colored cat. The cat had been there longer than the restaurant we were told by the owner and waitress. I thought this was wonderful that the cat was the keeper of this place and it seemed almost romantic to have a cat that was a caretaker of a cafe specializing in vegan and vegetarian options (although it does have limited fish and chicken dishes).

When it was time to order I was delighted to see that most of the meals were accompanied by a Pumpkin Soup and a salad. I ordered the samosas (the first night) and when they came they lost their thunder to my first spoonful of the pumpkin soup. I later told the waitress and owner that I would move here just for her soup and work in her kitchen for free. She laughed and stated she would put me to work if I kept coming. I did keep coming for those 2 weeks however, I never crossed paths with the owner after that. Only her cat and her cookies and the soup.

So it inspired me when I got home to find out how she made this recipe and I set to mimicking it the best I could. Turns out the recipe I created is not very complicated and is a “dump” and mix kind of deal. So please try this recipe even if you think it’s too warm out or you hate curry. It is worth every taste, every drop, it is an experience.

Place all items, except kale, over medium in large sauce pan. 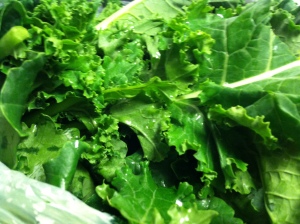 Chop the Kale with herb scissors or a sharp knife. Then, add kale just after the mixture is heated and steaming. 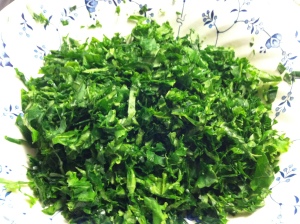 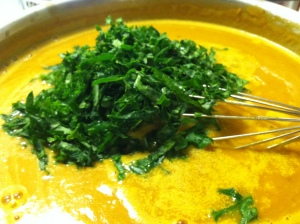 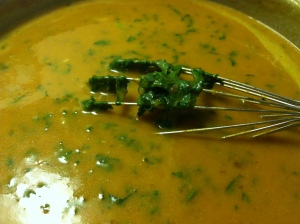 Bring to a boil, then place on simmer, and reduce until thick about 1hr. 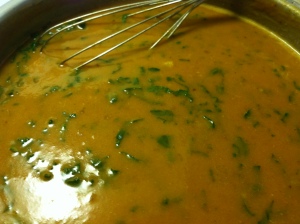 Serve hot. Refrigerate leftovers for up to a week in glass bowls (preferably).